Every now and again, or daily, I wonder, “Am I qualified for this?” And by “this” I mean parenting. It occurs to me regularly that side remarks or faces I make (and think nothing of making) could be the seed of discontent that grows inside my children until they loathe me and make very bad decisions to get back at me resulting in a landslide of bad or worse. I mean, truly, their entire lives hang in the balance when I make parenting choices. Too much?

My most recent concern is raising girls.

For example, how do I prevent my sweet Chloe from doing this as a college student:

while wearing a bikini in a bar surrounded by gross men? That exists. Or almost as dangerous as the aforementioned scenario, how do I dissuade her from making bull-riding a profession?

And when she wants to see “Princess Skating,” her name for any of the princess shows on ice, how do I tell her that her dreams can come true with or without “Prince Jarbeen” (her name for Prince Charming) or Eric or Prince Phillip or Aladdin? Do I need to say it? Can I just help her cultivate the inner strength and sass and spunk she already has?

Will that be enough to make her question and reject the bombarding images of skeletal women splayed out in sexual positions to sell socks in the magazines she’ll pick up as a teen?

Sure, I could say, “No magazines” but then there’s the television or the computer or some other crazy technological entertainment device kids will have by the time my girls are teenagers. I want to teach to them rather than censor them. Is that irresponsible?

I could also avoid princesses all together…

but I don’t. Instead I find myself saying, “Oh, Chloe, look at how that princess likes to read. You like to read, too!” or “Boy, Rapunzel is tough isn’t she? How can you tell she’s tough?” But is that enough? And what about when the stories get more complicated or the narratives come from real high school drama? Can I ever do enough to prepare my girls for a culture that isn’t always kind to girls? I’m serious. Can I?

Not long ago, Chloe got a pedicure.

I know. She was three. I’m embarrassed to confess that, but it’s a salon specifically for little girls to dress up and get pampered. Dear Lord, this is getting worse as I write it. Chloe’s eyes widened at the sight of the glitz and glam and light-up runway fully equipped with a television screen to see her made-up self strut its stuff. Had I been drugged that day?

Anyway, I allowed the pedicure to happen. I smiled and laughed with Chlo. I paid far too much for it, and then we left.

On the way home, Chloe picked the toenail polish from every nail. Every nail. And while I was a little ticked I had wasted the money, I must admit I was relieved that it wasn’t too important to her. We have not returned to that mysterious salon that undoubtedly sprinkles just enough of a mind-numbing narcotic into the air to leave parents senseless and willing to open their checkbooks.

I think the trouble for me is that I like fashion. I watched Disney movies. I played with Barbies–GASP! I enjoy pedicures and manicures and hair color. I buy socks (see previous modeling example). But I don’t want any of those individual things to define me. And somewhere, somehow I rejected the notion that women are submissive objects. Is it my job to tell my girls that or do they need to come to that conclusion by themselves? I don’t know. I REALLY don’t.

While I try to figure it out, I’ll celebrate my girls. Every part of them: 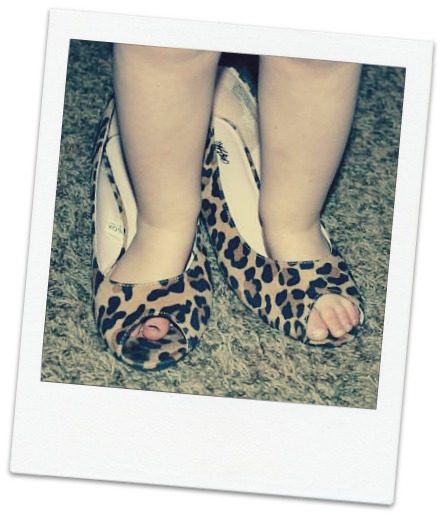 On deck for next week: raising boys!